under the leaf / Framing + Soffiting 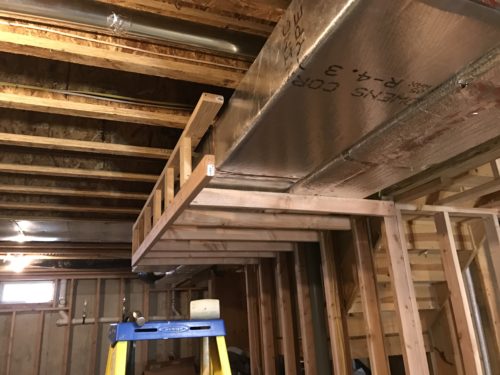 Soffits (or drywalled bulkheads that drop down from other parts of the ceiling) are a nice architectural feature.  They also serve a very functional need – to cover up all the “evils” in your basement project.  In our case, ductwork…lots of it.  The ductwork in our project was one of the major limiting factors in the design of our ceilings.  The main trunk is only a hair above 7’-0” above the ground, so even though we paid for an extra high foundation wall, there are still sections of the basement that had to have ceiling levels of 7’ (a different design of the systems could have possibly alleviated some of this problem by running main ducts between joists instead of perpendicular to them, etc.).  So in order to maximize the ceiling height we created these lower soffits to frame out different areas of our large basement space – breaking it into four distinct areas – entertainment/TV area, the bar area, the pool table area and a craft area, each separated by a series of soffits.

The ceiling in most of the bar area is 8’-6,” installing drywall (also known as gypsum wall board) at the underside of the joists where we can.  There is a lower ceiling right over the main bar area (another duct is the limiting factor here) which we didn’t mind because it gives a more intimate feel at the bar area.  We dropped the entire ceiling between the two beams to make this area feel separate from the rest of the basement.  We will accent this area with decorative lighting and a stone wall behind the bar…more photos to follow once it’s actually done (and I can narrow down my selection of light fixtures!).

In the center of these soffits will be a dropped acoustical tile ceiling…more on this in a later post.

But the framing of these soffits can be complicated, especially when the lengths are longer than a length of lumber (like longer than 8’ long).  Getting these structures level, plumb and aligned was VERY DIFFICULT.  I have a newfound understanding of why my contractors dislike soffits and why they cost more to build than dropped ceilings.  The main challenge of building these is that you have to build ladders for each face and then lift them up into place and fasten them to a ceiling above.  Not an easy task either.  We spent weeks building all of ours (which is why there hasn’t been a new Facebook post in some time…).  And we tried several different techniques for the different soffits to see if one was easier than the next – the one above our TV location was by far the easiest (and the last one we built, of course).  I think we’ll do more acoustical tile ceiling next time J